How to see the Northern Lights in Alaska

The Aurora Borealis is always there but you don’t just walk outside and see it. It appears, disappears, and reappears again. Some nights it’s more alive than others. Many people come to Alaska and never catch a glimpse of it. Others see it without realizing that they have. Knowing how to plan for it and what to look for are keys to a successful viewing.

If there is one thing about Fairbanks Alaska I love it's how bright the Northern Lights are! Sometimes it's just a steady stream of green.

Your chances of seeing the Aurora are dependent on several factors: time of year, location, light pollution, weather, and solar activity. Auroras are created when the Earth’s atmosphere interacts with solar flares from the sun. You will hear people mention the Kp Index when discussing the aurora. The Kp Index is the global geomagnetic storm index. “It’s 5 Kp tonight!” That means the lights should be really active. The higher the number the better your chances of seeing the Aurora.

Updates are easily accessible from the Geophysical Institute of the University of Alaska Fairbanks or an Aurora Forecast app. In theory the further north you go the better and that makes Alaska a great place to see them. They are best viewed in the late fall and winter months when the night is clear. If the lights are weak, light pollution can make them nearly impossible to see so travel outside of the city. You can use the Dark Site Finder to help find the darkest spots.

You’ve seen photographs of the Aurora. Beautiful and intense colors sweeping across the sky. In a way these photos do an injustice to the lights. Many go in search only to be disappointed with a sky that looks to just be filled with pale grey/green clouds. We were eating breakfast in Talkeetna, Alaska and a lady who was looking at our pictures said “The only thing I saw last night was clouds.” I took the following two photos that same night.

A camera sees the Aurora very differently than our eyes. One picture is actually several seconds condensed into one moment. The longer the Aurora stays in place the more intense the colors will be. It’s kind of like brewing tea. The longer the bag steeps the darker the tea. There have been instances where I couldn’t tell whether or not I was seeing the lights or a cloud so I pulled out my camera to check.

The white vertical light is called a light pillar. It's a phenomenon that was caused by a truckers lights interacting with the ice crystals floating in the air.

I’ve found the most success by going on a long drive into the country and having a friend keep an eye out for any signs of the lights. Driving is a nice way to stay warm on the cold Alaskan nights. It was -18°F(-27.8°C) in this photo. The lights show all night long. Just because they appear to have turned off doesn’t mean they won’t appear in another spot down the road. It also provides the opportunity to see different landscapes. You may even catch more than the lights.

I have seen the lights in the morning as late as 8:00AM and in the night as early as 11:00PM. That’s not to say you won’t see them later in after 8 or before 11. It’s really hard to say when the best time is. Using the websites mentioned previously can help you determine when the odds are the highest. Plan for a few hours. 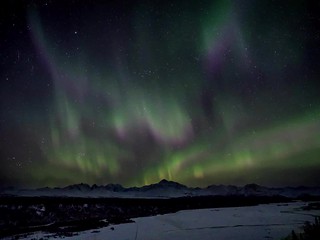 The lights move in the sky differently every night. It may show itself as a great band barely moving, a wisp the creeping vertically, sparatic flashes like distant lightning in a storm, or vertical blinds waving in the wind. It’s hard to accurately describe them but each show is special in it’s own way. Let the moment be special. They won’t be the same next time. I hope you enjoy the show.